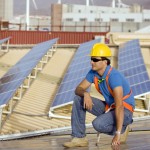 Innovations in renewable and other clean energy technology are surging forwards at incredible speeds and with increasing media attention. Tesla’s new battery storage technology has created quite the media frenzy, with some hailing the technology as revolutionary and others predicting its demise. The batteries are significant because they could allow energy storage from natural sources that tend to be intermittent and unreliable. But battery storage isn’t the only power systems industry game changer on the horizon.

Researchers from the University of Arkansas have invented an electrical power converter system that aggregates and converts diverse forms of renewable energy so that it can be used in electrical grids. This technology could be revolutionary since current renewable energy conversion systems have difficulty processing multiple inputs from diverse sources. And it seems to be promising: the United States Department of Energy is already seeking licensing opportunities for future commercialization.

As the University of Arkansas reports, the new converter is exciting because it addresses the inefficiencies of current models:

Its simplified control system uses power converters to allow connection of a variety of power sources to a small, high-frequency transformer. Then, using a high-frequency matrix converter, it produces stable electricity ready to be supplied to the electrical grid system.

Renewables have struggled to become widely adopted since we still haven’t figured out how they can be reliable resources for power grids. But both battery storage and power converters address this critical issue.

This is especially significant as Canada and the United States are looking to cut carbon emissions and integrate more renewables in power grids. The Independent Electricity Systems Operator (IESO) recently predicted that approximately 2,200 MW of solar and wind generation capacity will come online within the next 18 months. With the renewable market growing, it is more important than ever for new innovations to allow for diverse energy sources to work across modern electrical grid systems.

Have you come across any exciting innovations in power systems technology? Tweet us @RodanEnergy